We will be adding Newsletters, Photos and other useful information as the Term progresses. Please feel free to come to see us if you have ideas about what we can include.

Please scroll down to read the latest Newsletters and Learning Logs.

YOU ARE NEVER TOO OLD FOR BUBBLES!

Year 6 have been working on a D&T project recently to design and make a pen holder by shaping and heat bending plastic. They also made their own computer games using Purple Mash 2DIY and 2DIY-3D.

The children took part in ancient races during the morning. They had been collecting points throughout the days by completing and competing in a number of challenges to determine how many seconds head start they would get for the BIG race. This was one race that consisted of 4 parts with the whole group  involved firstly in running to an allocated point. The next part of the race involved rolling the ball to the next point. Then they had to travel from one end of the track to the other using only hoops. The final part involved forming a chariot to cross the finish line. After competing in the final race the children celebrated with an Olympic Feast and a Medal Ceremony.

PLEASE ENSURE THAT ALL YEAR 5&6 COME TO SCHOOL WITH SPARE CLOTHES AND/OR WATERPROOFS. ANCIENT OLYMPICS DAY 3 ON WEDNESDAY 15/06/16 WILL INVOLVE TAKING PART IN ANCIENT OLYMPIC RACES.

Thank you for your continued support.

Challenge 3: To create a boat using the resources provided. The aim was to make and decorate the boat and then travel across the sea. All the group needed to fit in and the boat was to remain in one piece for the whole journey.

Challenge 4: To go on a mini beast hunt making sure that great care is taken not to hurt the bugs. One point was given for each different bug found (They were able to use the bug ID sheets/trays). Free points were given by the mentors based on how thoughtful they were towards the mini beasts.

Challenge 5: To create the given shapes using strips of crepe paper and all members. The whole group except one was blindfolded. The member that was not blindfolded could speak to direct the group. One point was given for each correct shape. The group member giving directions was not allowed to touch anyone or anything.

Today Year 5&6 came to school like any other day. Not knowing that they were going to become part of an Ancient Olympic Tournament. They met with their mentors who invited them along to take part in challenges to qualify for the great tournament. After the introductions the children were grouped ready to begin. Today they took part in 2 challenges. All the challenges are to earn as many points as possible.

Challenge 1: To build the tallest tower possible using only newspaper and sellotape. They were given 25 minutes to carry out the challenge. Points were allocated only if the tower was standing when the time was up, the taller the tower the higher the points.

Challenge 2: To get the whole group from one end of the school hall to the other. All members but one was blind folded. They were not allowed to touch any obstacles or anyone. They had 20 minutes to complete this challenge. They gained points either for each member that got across or points 8 – 1 (8 being the highest).

They even had an opportunity to create their team name and banners.

Mission To Mars - Coding with Lego at Chester University

On Friday 12th February 2016 we were lucky enough to have the opportunity to take a small group of pupils to work with Associate Teachers from Chester University on a coding project.

Using Lego Mindstorms, each Mars Mission Team had to programme their Mars Rover to complete a range of tasks, moving around different landscapes and collecting objects. The children had to work in their team to write the code for each stage of the mission, changing variables such as distance and angle of turn. They had to work out when to use the proximity, touch and colour sensors to help the rover move around 'Mars'.

All of the children were totally engaged in their task and worked very hard, learning so much, that they all moved on to the extra challenges set for them.

We would like to thank Dr Ann Cook and her students for inviting us to attend for the second year running. We hope we can go again next year!

Year 5/6 had a great day out at the National Slate Museum in Llanberis. Despite the winter weather, very cold showers interspersed with sunshine, we managed to experience the variety of things on offer at the museum.

We had a slate splitting demonstration, where Riley in Year 6 had the opportunity to join in and then to keep the slate he split off. We also had a tour which included information from the guide about the use of wood throughout the slate workshops, especially the making of wood patterns to be used in the foundry.

We compared the different houses on the site which have been recreated to show life in 1861,1901 and 1969. Needless to say the children wouldn't want to travel back to those times to live!

A highlight was the giant water wheel, the largest in mainland Britain, which provided power to the whole site for much of its working life.

When we returned to school, a group of Year 6s used the information about the height of the waterwheel (15.4m diameter) and their measuring skills, to paint a circle on the playground to show the incredible size.

We hope you enjoy some of the photos we managed to take.

Just before Christmas, Arwel Williams, from TechnoEd, came to school to work with Year 5 and Year 6. The children built their own Jitterbugs using a wide range of tools and materials including plastics, metal and card, which they cut, joined and made holes in. They decided which type of cam weight to put on their motor, after exploring the effect different ones had on the 'jittering' movement. They learned about circuits: cutting and joining wires, connecting motors and made their own switches to control their bugs.

Finally, the children designed how their 'Bug' would look. They were very creative in their thinking for these.

Look at the photos below to see them working with the tools, making choices and some of the final Jitterbugs.

This year we performed a 'Countdown to Christmas to sell out audiences. Year 6 took on all the main roles linking the scenes from all the other classes. They were fantastic in their parts and a good time was had by all. 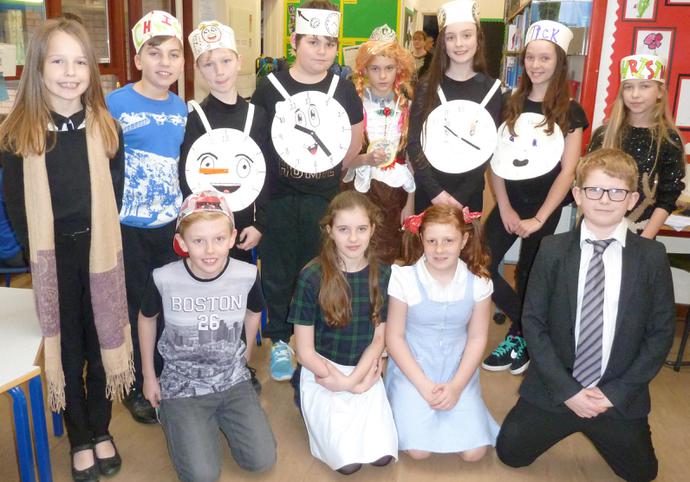 Year 5 and Year 6 pupils performed their Remembrance poetry at the church and memorial on Remembrance Day. Please look at their moving poetry below.

Year 6 have been using PowerPoint to create visual descriptive presentations about Space. This work was inspired by a quote from our class novel 'Cosmic' by Frank Cottrell Boyce. The descriptions included the use of alliteration, simile, powerful adjectives and adverbs and personification to create an image for the reader .

The children learned to use a wide range of new tools in PowerPoint including extending their animation and transition skills and learning how to add audio.

We saved them as videos so we could share them on the website. Please take a look at our work by following the link below.

Year 6 have been using Padlet, a web-based interactive 'graffiti wall' to share what they have been learning. The children add a post and the other children can instantly see the new posts on their own screen. Our first 'Padlet' was about our learning in maths this week where we have been working with a range of measures.

Click on the link below to see their posts.

Year 6 enjoyed learning about keeping safe at our Forest School.

Year 5 were given a challenge to build a shelter for the shortest person in their group. They rose to the challenge and made some very interesting shelters. Well done Year 5.

On Thursday Year 5 and Year 6 made a scale model to show the distances from the Sun to all of the planets in our Solar System .... using 'Loo Roll'!

The children worked brilliantly in teams to get the job done. It was a great fun way to learn about the vast size of our Solar System!

Thank you to all the families who attended our Nant BH Assembly on Friday. It was great to see so many of you. There is a copy of the presentation below so you can look at the photos. DVD orders should be completed by the end of the week.

We are looking forward to the Techniquest Planetarium being in school on Tuesday and then it's Roald Dahl Day on Friday. Have you thought about a costume or prop yet?